Here is some info about Chamtrul Rinpoche for those who want a little bit more info about him as an authentic Nyingma lineage master.
He is also a non sectarian master, of which HH Dalai Lama is one of his main Gurus.

He began his education at the age of 9 by going to the local elementary school. At the age of 14, he took the Upashika vows from his first Root Guru, the highly realized Dzogchen master Naljor Yeshe Wangchuk Rinpoche. He received teachings from him on the preliminary practices (Ngondro) and subsequently completed the 500,000 accumulations of the Ngondro three times, mostly in retreat, over a period of three years.
Following this, Rinpoche studied and practiced Tummo and Dzogchen teachings intensively under the direction of his Root Guru. During this period, Rinpoche undertook a five month pilgrimage of prostrations from Mardo Tashi Choling to Tugchen, the statue of Avalokiteshvara situated at the top of the Holy Mountain of Tsako Takyab.
At the age of 19, he received ordination from Getse Khenpo Wangchen and became a monk. For the next few years, Rinpoche continued studying at his monastery with his first Root Guru.
He then moved to the Institute of Buddhist Philosophy (Shedra) of the Kathok Monastery where he stayed for two years. Then, he joined the Shedra of Serta Larhong Monastery. After studying the Five Major Sciences curriculum (intensive training in Sutra, Tantra, logic etc...) under the supervision of His Holiness Jigme Phuntsok Rinpoche, his second Root Guru, he obtained the title of Khenpo (Doctor in Buddhist Philosophy) from the Serta Lharong Institute.

At the end of 1996, Chamtrul Rinpoche left Tibet to undertake a pilgrimage of two years in Nepal and India. During this period, he gave occasional teachings and learned to speak English, but principally he received teachings from many High Masters. Over the course of his lifetime, Rinpoche has received teachings from more than 25 different Masters.
In 1999, he settled in Dharamsala, Northern India, and it is mainly from there that he carries out his dharma activities. These include teaching and supporting his monastery in Tibet and the regions’ nomads, with projects related to health and education and helping the needy, both monks and lay people in Tibet and India.

During the last ten years, Rinpoche has taught students from many different countries including Tibet. Besides India, Chamtrul Rinpoche travels around the world to teach Dharma at the request of his many students.
Chamtrul Rinpoche has taught for over 16 years to thousands of Tibetan monks and foreign students (monks, nuns and lay people), in Tibet, India and other countries. In the words of Rinpoche himself: “Teaching is what I do in this life. Wherever someone asks me to teach, I am there.”

For more info you can see his website: http://www.chamtrul-rinpoche.com/
or his SA blog (Being updated) : http://chamtrulrinpochesa.wordpress.com/2011/07/

Monday, 15th August 2011
7pm-9pm
REFUGE Who are the final objects of refuge and how can we believe (trust) in them?

WEDNESDAY, 17th August 2011
7pm-9pm
Achievement of the Secret Qualities of the Master

THURSDAY, 18th August 2011
7pm-9pm
TANTRA What is the meaning of Tantra and how should we practice

PLEASE RSVP your attendance. Thank you!

The Dharma Talks are free of charge and open to all.
Donations are welcome to cover the costs of bringing Rinpoche to South Africa.

Saturday, 20 August 2011
2pm-4pm
Meditation and the Nature of the Mind

Sunday, 21 August 2011
9:00am-11.30am
Developing Loving Kindness & Compassion
VENUE: TIBET SOCIETY
**Please note Booking is essential and there is a charge for this particular event as it includes payment for Brunch.

Please contact Elizabeth regarding these and other talks by Rinpoche.

The Dharma Talks are free of charge and open to all.
Donations are welcome to cover the costs of bringing RInpoche to South Africa.

Wednesday,24 August 2011
7pm-9pm
What does it mean to be a Buddhist practitioner?
Venue: Hout Bay BC*

Thursday, 25 August 2011
7pm-9pm
Refuge: Who are the final objects of refuge and how can we believe (trust) in them?
Venue: Hout Bay BC*


If you can attend all the teachings in succession, that will be greatly beneficial, but if you can only make a few, that is fine.
People new to these teachings are warmly welcomed.

There is no charge for teachings however donations are appreciated to cover costs and to be offered to Chamtrul Rinpoche.


Please note:
For the weekend workshop at the Hout Bay Buddhist Centre, we will have a bring and share lunch (27th-28th Aug).

For the weekend workshop at the Tibetan Tea House, lunch can be purchased at their restaurant (3rd-4th Sept).

The duplicate copies of the above post in the Nyingma and Dzogchen forums have been deleted. 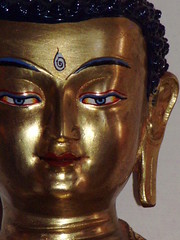